Just a couple of days ago, Elon Musk sat down with Lesley Stahl of CBS where he opened up about things that happened this year.  To be fair, I only think the interview was inspiring because of who was interviewed: Elon Musk.  I don’t approve of how condescending and critical Lesley Stahl was of Elon.

In the interview, he said some things that many people have taken and ran with. One of those things was, “I don’t respect the SEC,” Several writers and journalists have criticized Elon for that statement, but what they fail to understand is what he followed up with, “I respect the justice system,”. 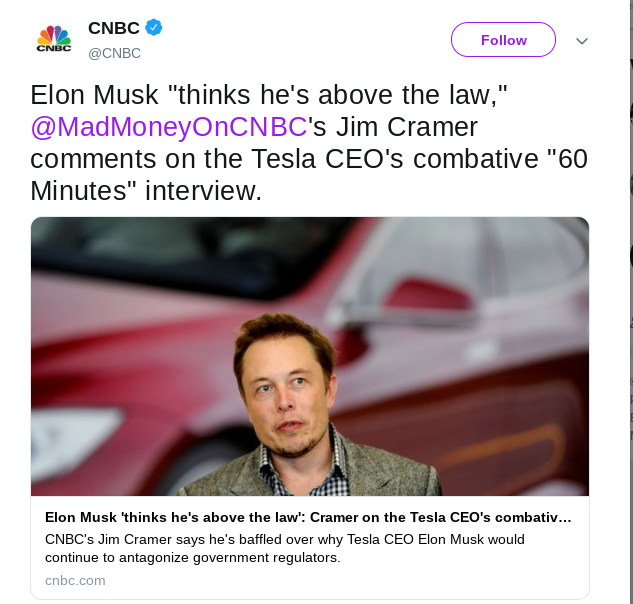 There is something else he talked about that I haven’t seen many people address that seriously needed to be addressed more. Bullying. Elon was badly bullied and had a rough childhood. When he made that statement, I felt him. Many people had a rough childhood. In high school, I had a teacher tell me I should just die–after I’d almost died from the onset of asthma and was dealing with severe PTSD at 14. Being bullied by a teacher who encouraged the class to bully me really made me feel as if I should die, but  I didn’t. I overcame the asthma and learned how to take care of myself. I fought. And the look Elon gave Lesley when he said, “I was almost beaten to death, if you would call that bullied,” just resonated with me.

I was never physically assaulted–well I was but I always fought back and won–but the psychological bullying from those who are supposed to protect children is pretty bad. Those voices stay with you through the rest of your life, haunting you and reminding you of your setbacks. Elon spoke to Lesley in a way that I wish I had the balls to speak and stand up for myself when I was 14. That inspires me.

The look was that of a survivor who is fierce and determined. Someone who, today, won’t let you walk all over them and will trip you up if you attempt to.  Many people who are bullied and say, “Yes this happened to me,” often get the nonverbal response Lesley gave to Elon because they (people like Lesley) don’t know how to react to the truth of what society does.

And honestly, to me, Lesley came off as a bit of a bully in the way she phrased some of her questions. She seemed very judgemental. She held that accusatory tone in her voice when she talked about pot smoking as if it were the worst sin. And there was no mention of the diver’s own part of the drama where he told Elon to shove the sub where the sun doesn’t shine. I guess it’s okay if your five year old wants to know how a sub is going to fit in those places.  In fact, I haven’t seen any news story condemning the diver for saying such sexually provocative statements on live television.

How can the media be so judgemental toward Elon for his snappy response while looking the other way because the ‘victim’ is, in fact, the bully who started it? The media, in this sense, is guilty of enabling bullies.  This is a culture that is toxic. We have a system in place where it’s okay to bully but if you fight back, then you are the problem. This culture is not okay. Elon Musk has every right to defend himself.

He has every right to tweet. Just because he is a billionaire does not mean he isn’t human like the rest of us. In fact, he is one of the few down to earth billionaires who cares about people. I say this because he’s been kind to me. I’ve interacted with him several times and each one has been positive.

Elon Musk is one of the good guys and hopefully, one day, people will wake up and realize that. His genius and the means to create more companies that actually benefit our planet and species is a gift. Seeing the way he faced Leslie’s hard questions head-on with laughter, strength and a straight back have encouraged me to face my own battles daily.

In the interview, Elon said that Tesla is an incredible American success story. It really is, however, so is Elon’s own story which is still continuing today. Elon has a way of inspiring people not just to believe in him, but to believe in themselves and realize that we all can contribute. This is, what I believe, he does for Tesla employees.  Elon is the underdog we are all rooting for to win against all the odds, bullying and those standing against him.  Elon, if you’re by chance reading this, stay strong. I believe in you, and so do millions of others.

✨♥️♥️♥️♥️♥️♥️♥️✨
“What actually happened here was an incredible #AmericanSuccessStory. All these people work their ass off day & night to make it happen. And they believe in the dream. And that’s the story that really should be told.” – @elonmusk 12/2018 @60Minutes interview pic.twitter.com/rC151vwcLw

Also, I do want to point out something. Earlier tonight, I was in a twitter thread with someone talking about the length of the interview. Elon replied and said that the interview was actually longer. Which goes to show you that, in my opinion, the media can be biased. They had several hours of interview time but chose to focus on all the negative things that have happened.

60 Mins actually had several hours of interview time, which they distilled to 14 mins. Many stories could been told with that time. This was accurate as viewed from an Upper East Side Manhattan dinner party.

Elon, you’re awesome. And I hope, that as a writer, I can help balance some of the negative press with realistic and positive articles.