Kata Lyst Stella V.  @marvelwonderkat  is the winner of the Adventures of Starman comic full package.
Including a signed photo of Starman in front of SpaceX 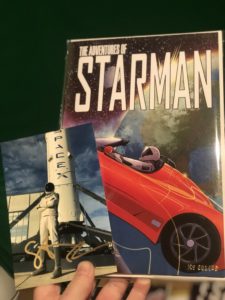 1. Ford Prefect is the person you called. Ford Prefect is obviously the name of one of the main characters of the book. He’s not human. He’s from Betelguese Five and his name is not really Ford Prefect; he had chosen the name thinking (mistakenly) that it was “nicely inconspicuous.” His nickname is “Ik.” He got accidentally stuck on Earth for 15 years. He was working on updating the Hitchhikers Guide to the Galaxy, and he updated the entry for “Earth” from “Harmless” to “Mostly Harmless.” He saves his earthman friend, Arthur Dent, by taking him to a pub, making him drink 3 pints (as beer apparently helps with relaxation and cushions the effects of going through a matter transference beam).

2. Ford ’s at a pub during your phone call with him. In the book, Ford takes Arthur to a pub before Earth is destroyed to drink the 3 pints mentioned above. As a side note, in the Galaxy, “Pan Galactic Gargle Blaster” is a well-known drink. “Blaster” is the name of the game Elon created and sold as a young teen.

3. Ford mentioned gin and lemon in his conversation with you. Jynnan tonnyx is mentioned in Hitchhikers Guide. Not only is it “a curious fact, and one to which no one knows quite how much importance to attach, that something like 85 percent of all known worlds in the Galaxy, be they primitive or highly advanced, have invented a drink called jynnan tonnyx…or any one of a thousand or more variations on the same phonetic theme,” but Ford Prefect and Arthur Dent, when being interrogated, are offered jynnnan tonnyx…with Lemon.
The line is paraphrased from the book. “…..I wouldn’t be sitting here like a lemon looking for a gin.”

4. The Tesla Deep Thought dude that appeared on your screen was Green. Words flared in Green when typing on the screen of the Heart of Gold. The color Green comes up quite a lot, actually, in Hitchhikers Guide. The Matrix also uses green, and Yoda is also green.
The movie version Deep Thought was a golden color, this green version was directly from the TV series.

7. There is a reference to the matrix in Hitchhikers Guide (so double meaning between the reference in the book and the movie The Matrix). The reference is to the first greatest computer of all time, that is designed by Deep Thought, who describes it as follows: “A computer that can calculate the Question to the Ultimate Answer, a computer of such infinite and subtle complexity that organic life itself shall form part of its operational matrix. And you yourselves shall take on new forms and go down into the computer to navigate its ten-million-year program! Yes! I shall design this computer for you. And I shall name it also unto you. And it shall be called…the Earth.” Phouchg gaped at Deep Thought. “What a dull name,” he said….) Also, Earth was destroyed 5 minutes before the greatest computer ever built – Earth – came up with the Ultimate Question.

8. Speaking of which, you asked a bunch of questions (some suffered the same problems that are discussed in Hitchhikers Guide). After revealing the Answer is forty-two in front of many people, there was a long silence. There were two guys talking to Deep Thought.
One said: “We’re going to get lynched, aren’t we?” he whispered.
“It was a tough assignment,” said Deep Thought mildly.
“Forty-two!” yelled Loonquawl. “Is this all you’ve got to show for seven and a half million years’ work?”
“I checked it very thoroughly,” said the computer, “and that quite definitely is the answer. I think the problem, to be quite honest with you, is that you’ve never actually known what the question is.”
“But it was the Great Question! The Ultimate Question of Life, the Universe and Everything,” howled Loonquawl.
“Yes,” said Deep Thought with the air of one who suffers fools gladly, “but what actually IS it?”
A slow stupefied silence crept over the men as they stared at the computer and then at each other.
“Well, you know, it’s just Everything…everything…” offered Phouchg weakly.
“Exactly!” said Deep Thought. “So once you do know what the question actually is, you’ll know what the answer means.”

Btw, the mice ultimately decide to make-up the Ultimate Question, deciding that “How many roads must a man walk down” should suffice to keep everyone confused saying that it “[s]ounds very significant without actually tying you down to meaning anything at all.” LOL. The Mice also tried “What’s yellow and dangerous?” but decided it didn’t fit the Answer. They also tried “What do you get if you multiply six by seven?” but it was considered too literal and factual and wouldn’t sustain interest.

9. In your car, Tesla Deep thought says “Good Afternoon.” In the book, Deep Thought says “Good Morning” on the day it reveals the Answer to Life, the Universe and Everything. (the text was altered from morning to afternoon because it was 4:20 in the afternoon.)

NOTE: 42 appears quite a lot in the video. I don’t know if these count as different references, but I’ll list them, just in case.

10. Forty-two or 42 is the Answer to the Great Question of Life, the Universe and Everything. It only took 7 ½ million years for the computer Deep Thought to come up with the Ultimate Answer.

11. 420 is the time (420 is essentially 42) on your Model 3 console (throughout the video).
Referencing the “funding secured tweet”, and if Elon Musk did use 420 intentionally in that tweet, it could be assumed it is due to the number 42, not 420 of the marijuana culture. He has admitted he doesn’t do that (except once on Joe Rogan podcast), and he is indeed fascinated with “The Hitchhikers Guide to The Galaxy”, so correct in saying “420 is essentially 42”

12. 420 is the time on the Elon Musk text regarding bitcoin.
ongoing joke about the bitcoin spammers in Elon Musks tweets. That is a screenshot of an actual tweet by Elon Musk.

13. The Tesla Ring has an arrow pointing to the number 42.

14. The graphic of the Model 3 looks like the sleek white running shoe shape of the Heart of Gold ship.
Interesting to see that, not an intended reference but makes sense 🙂

16. There’s “a robot camera that hovers above” in Hitchhikers Guide. Kinda like the Yoda drone. (This is a stretch, I admit).
Another unintended reference but that totally makes sense

17. Regarding the ring/key with the “arrow” pointing to 42, there is an “arrow” drawn on a note pinned to a part of the sparse instrumentation in the aircar that had belonged to Startibartfast. The arrow pointed at one of the controls, and the writing next to the arrow said: “This is probably the best button to press.” (This is also a stretch, but what have I got to lose?)

18. I don’t know what the 10 button pushing means, but there is a lot of improbability, coincidence, ironic and random occurrences that all have actual effects throughout the book. To the extent improbability plays a role, I list it here. I mean, the whole video and step-by-step process was both brilliant and ridiculous (particularly as about half of it merely shows something that’s written in the Model 3 Manual).
By pushing the button 10 times, the light at the charge port starts to flash in rainbow colors. It is another easter egg in Teslas, a way to show that off in the video and use that to connect to Tesla Deep Thought

Also SpaceX drone ship references. The drone ship names are “Of Course I Still Love You”, and “Just Read The Instructions”.  In the video it is said to Eve the car: “O come on Eve, don’t you still love me, just help me figure this crazy riddle out”. Eve responds “Of course I still love you, just read the Instructions”