Why Tesla Is So Important

Tesla is more than a car company.  It’s an idea. It’s a way of life. And it’s a statement that says:

“I am changing the world in a positive way,”

Tesla is an EV, electric vehicle that is a bit on the pricey side, but for those with the ability to afford it, well worth it. One of the goals of Tesla is to make more affordable cars but the money made from this company is just going toward it’s founder’s dream of changing the world for the better for everyone.

Elon Musk wants to make humanity a multi-planetary species. That takes funding especially when he is facing nonstop opposition on all fronts. But, why a car company? Why not? Tesla being all electric means there is no carbon output. None of that nasty  gas as the car drives by. How many times have you been passed by a bus or a big truck that shot out that black gas through the exhaust pipe? Did it smell good?

Of course, not. So imagine every single gas car on the planet doing that. Where does that carbon go? Into the air we breathe in. Tesla creates cars that do not use gas. In fact, on their website Tesla lists a Carbon Impact. This is the total amount of carbon dioxide that has not been put into the atmosphere due to the fact that people are driving Tesla vehicles.

This number is growing larger every day. In fact by the time I took the screenshot and embedded it into this blog post, those last 5 digits tripled. And this isn’t all of the good news. The United States and China, at the timing of this writing, are the top two countries in the world cutting out the carbon. 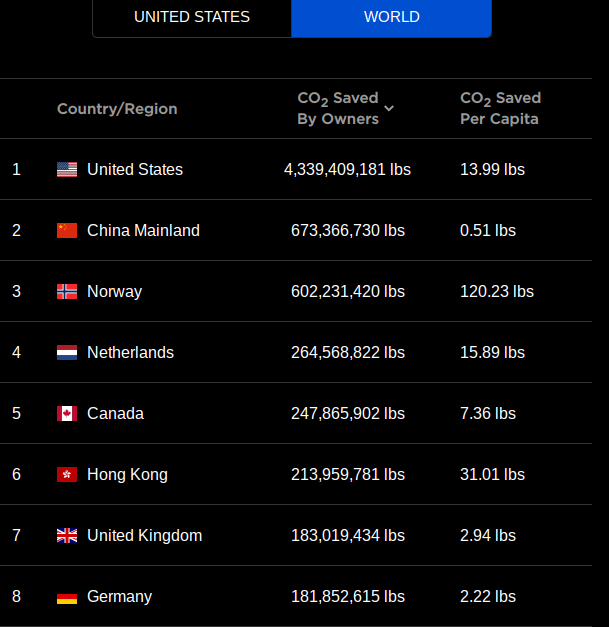 13.99 is a lot of pounds of carbon dioxide. Carbon itself is well known mineral that produces both diamonds and graphite. Imagine, for a moment, that you could turn the Carbon in the air into diamonds. This stuff that we are breathing in daily does have that potential and even scientists in Europe are actually experimenting with this train of thought, although, not turning carbon dioxide into diamonds, but rather recycling it to get it out of the air we breathe. The goal is to recycle the carbon dioxide in the air and reintroduce it back to the biochemical cycle of plants. They are actually using a synthetic diamond in the experiment and you can learn more about this experiment here.

Back to Tesla. The reason Tesla is so important is because it represents hope for us as a species. Tesla has caught a lot of negativity in the press and so has Elon Musk, but what many people fail to realize is that Tesla is the loudest voice leading the way to cleaner transportation. Tesla has a variety of vehicles right now including semi trucks.  There are 50 countries that are included on Tesla’s Carbon Impact page.

I Can’t Afford A Tesla, So How Can I Help?

Many people have said this to me. I, too, don’t have the money to afford a Tesla. However, don’t let this limit you.  Elon Musk has millions of followers. So does Tesla. Imagine if each follower of both did one small thing that helped. They shared this post. They bought merch. They wrote their own article supporting Tesla, or even an article that talks about why electric vehicles are so important. It’s not your wallet, but your voice that matters the most. It’s you.

“I can’t help what others are doing in China or wherever,”

No you can not, but in fact, the only control over any situation you have is your actions and reactions. With this in mind, you can do something positive for our world. Don’t litter. Recycle. I’m not going to say, “take the bus,” because bus systems suck in rural areas. In fact in some areas, there are no bus systems. Do what you can. It is enough.

Tesla is doing a lot to change the world we live in for the better. It’s easy to think that you can do nothing or that it doesn’t affect you, but it does. And it’s easy to feel overwhelmed about a situation that is beyond your control, such as the recent fires in California that people are still recovering from today. Simply being aware that there are things outside of your city or inner circle going on is a great first step. The next step, find a way to do your part because until Elon reaches his goal of making our species multi-planetary, Earth is our only home. Let’s find a way to take care of it instead of destroying it.