The Funkpuppy Friday event has long been popular on twitter, but over the weekend we’ve seen some startling developments with the emergence of a new “FrunkKingdom” challenger. After some light-hearted twitter comments and friendly banter, we discovered a parody account for Frunkkitten, challenging Frunkpuppy for claims to the throne.

Soon after the frunkpuppy.com website went up, then came along a parody of it:
http://frunkkitten.com/

This website tells a different variation of the original story about Earl and his Frunkpuppy “cult”.

The banter has gone back and forth until a battle was declared by the frunkkitten community:

MEEEOOOOOOOW!!!!! hear my roar
The time is here for all warrior kittens to come together!
The battle for the frunk kingdom has started. We have been the first to get into boxes, it is our territory
no more #frunkpuppy until we get our recognition!
go to: https://t.co/BYqpOdvA9v

A video was made with a Grimes song:

News reports were being posted:

It seemed like the kittens got support from Elon Musk ???
Not sure who captured this image but it was posted by @mojosusan 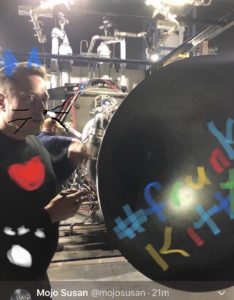 At one point Earl, the frunkpuppy creator, was being stalked by frunkkitten:

Onlookers waiting for the ensuing bloodshed:

Kitten air force will attack from above while ground kitty distracts him. pic.twitter.com/MpTT4Vcrf1

I am a Jedi cat. I’m one with the Force, and the Force will guide me.
Do not underestimate the power of the cat side of the force. pic.twitter.com/GCPhv0yoxJ

Jedi kittens will never be seduced by the bark side! pic.twitter.com/uaDudpGB9b

Mewbacca arrived to the battlefront to help protect the kittens:

After all were assembled their battle commander gave a battle speech for war:

Hold your ground! Cats of Catshire, I see in your eyes the same fear that would take the heart of me. A day may come when the courage of cats fails, when we forsake our friends and break all bonds of fellowship, but it is not this day. This day we fight! pic.twitter.com/ny32lHNW4p

Cats all over were hopping on their EV’s and fighting back:

We will ride our kitty Teslas into battle pic.twitter.com/ajYaFUqVUe

Kittens are the ones intimidated
I try to be nice to the dogs but then this happens pic.twitter.com/5qGJ3r3MUe

What about the Frunkpuppies? What were the dogs doing?

Initially they used some intimidation tactics:

Have it your way. This option will not be given again! pic.twitter.com/TSSJ8ZEjmL

They brought in a dragon dog, but can he compete with that army of cats already assembled?

Faster than a speeding bullet! More powerful than a locomotive! Able to leap tall buildings in a single bound! This amazing stranger from the kingdom of #Frunkpuppy! The pup of steel! It’s Super Pom Pup! pic.twitter.com/psGY7cVTjF

Then it seemed they fell asleep? Not sure what happened, did the cats drug them with catnip in doggie treats?

But in the end who has won?
Is there a winner in this battle over the Frunkdom?
It seems like everyone involved had a lot of fun, but from what I have seen it would appear that cat people are more artistic and creative than dog people. What do you think, is there a certain personality type that can be generalized from whether a person has cats or dogs?

Someone has already declared a winner:
“The cats rule the universe”, which one would assume that would include frunks.

The cats say they have always ruled over boxes and small spaces, the dogs claim they had the frunk first.

Will this be enough for a Kitten or Cat to make it into a Frunkpuppy friday event?

Should we strive for equality for all and adopt “frunkpets” as the name instead?

Remy the Harvard Law School cat was involved and apparently found a “claws” to help.

Remy goes to Harvard Law School & has been researching. She found a claws…

Remy seems like one tough cat and will “fight” through the legal channels, she thinks the discrimination of cats is cruel:

You know what’s not hilarious Wade? This. This is just cruel. pic.twitter.com/7d7mJ8LqWJ

Will there be a peace treaty? We are waiting to see how this ongoing battle unfolds, hopefully the fighting and bloodshed will stop soon and peace will return to the frunkdom. Regardless of what side you’re on, one things is clear – the love of a frunk can unite us all.

But the real question remains, who is FrunkKitten?
One Twitter user thinks it’s Eli.

No one seems to know and that is a mystery, but as we know, cats tend to be mysterious creatures anyway.

According to frunkkitten.com, if you want to help support their cause:
“Help us battle this kittencide by the dogs and support our cause.
Tweet your best kitten photos in frunks every Friday with #frunkpuppyfriday”

Have fun with your favorite frunk pet no matter what the species. remember to follow the #frunkpuppyfriday hashtag and you can support them at frunkpuppy.com.
Instructional video here:

update for May 7, 2019
There was a first ever #frunkkittyfriday contest and now there is peace in the frunkdom!

Any potential new Tesla owners can get free supercharging by using the following link and referral code wade34296
ts.la/wade34296